"NO BONES ABOUT IT" 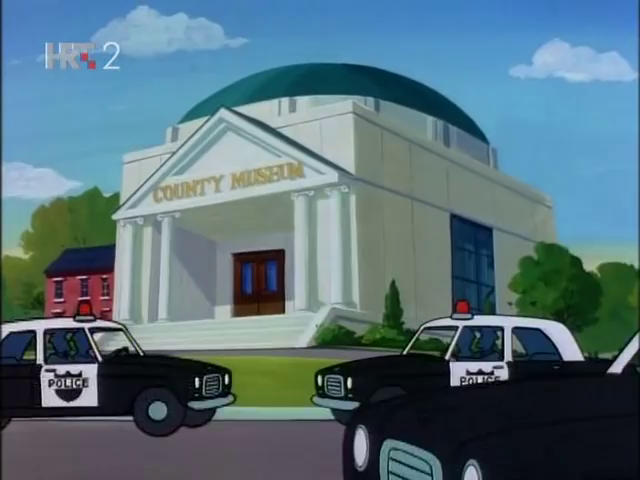 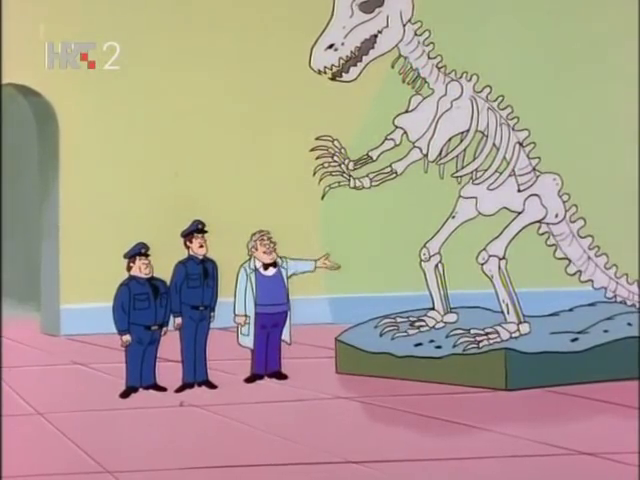 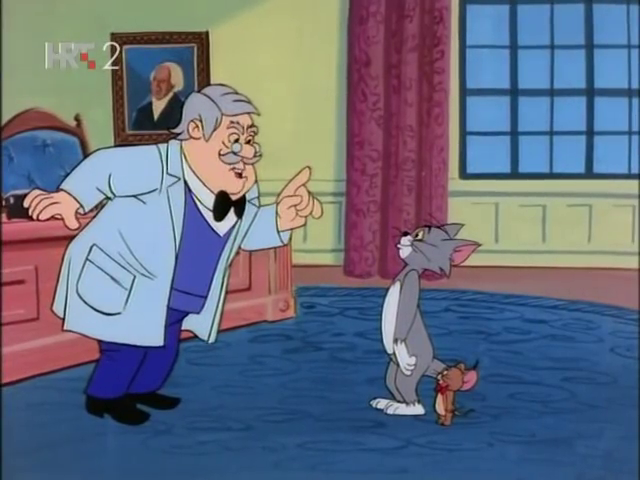 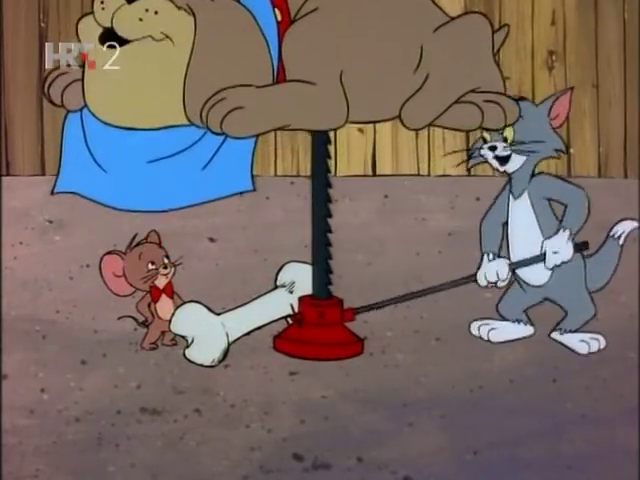 Tom and Jerry set out in search of a priceless toe bone missing from a priceless dinosaur in a museum where they work. Then, they spot Spike the bulldog carrying a bone in his jaws; figuring it's the missing dinosaur bone, they try every method of retrieving the bone from him: coaxing him with a steak, lifting him up with a jack, scaring the dog with a cardboard cutout of a lion, and tunneling underground. They finally seize the bone and race back to the museum with it, only to find out from their boss that he had the original bone cleaned and forgot all about it! Feeling falsely accused, Tom has Jerry yank out a bone from the dinosaur, causing the entire skeleton to come crumbling down--and T&J to lose their jobs. Nonetheless, the cat and mouse leave victoriously--and are set upon by the vengeful Spike!

Tom & Jerry are relaxing at The Palm Desert Inn, when an old traveler comes along begging for water. After a sip of Tom's refreshing Grape beverage (which he chooses over Jerry's Cherry-Lime!), the traveler gives Tom & Jerry a map to The Lucky Dutchman Gold Mine, but warns them to beware of Black Barney, whom they inevitably run into. Black Barney, it seems, is only the least of Tom & Jerry's foibles; aside of the cat and mouse pitting themselves against each other for the map (cats and mice will be cats and mice!), various gusts of wind constantly blow the map from their hands, bringing new meaning to Shakespeare's phrase, "the ill wind which blows no man to good" (hence the title of this very cartoon!). A final gust of wind blows the map onto the street, where it is immediately swept up by a street cleaner, and dumped by truck onto a garbage dump, where T&J spend the rest of the night sifting through it in search of the map.

Tom and Jerry are relaxing at the beach until a macho cat comes along and, walking across Tom and Jerry's beach blanket, kicks sand on the duo. This starts an ongoing rivalry between Tom and Jerry and the cat. They fight over things like having a radio on or off, and whether or not their badminton game is making too much noise. Spike gets involved in the rivalry twice, and gets revenge in creative ways. First he uses the badminton net as a slingshot and sends the cat flying across the beach. Later, he puts a key in the cat's back and, winding him like a toy, sends him marching across the beach. T&J try to go rafting, but the cat sends his fishing line out to the raft, deliberately destroying it and causing the cat and mouse to sink. As revenge, Jerry ties the fishing line around Spike's barbell, pulling him away, once again framing the cat for the job. The cat throws Tom & Jerry in the trash. Finally, Jerry ties the fishing line in the cat's bathing suit, and attaches a magnet to the cat's tail. Tom ties the other end of the line to a set of balloons. The balloons send the cat soaring away, and the magnet attracts the barbells Spike is lifting. Both dog and cat soar far away, leaving Tom and Jerry to finally relax.