A fox, claiming himself to be chronically nervous, tries to get Tom & Jerry to give him food and shelter from a hound which has been chasing him. As the fox hides out under the table, in a drawer, and in the bathtub, the hound, with an arsenal of disguises (including a plumber and a vacuum cleaner salesman), enter T&J's home and tries but fails to nab his elusive quarry. It isn't long before the pushover fox's welcome is well worn out in Tom & Jerry humble abode, and the two immediately put a stop to it. The fox, in retaliation, grabs a box, stuffs it with half the food from their refrigerator, and leaves...and rejoins the hound, who is really his partner-in-crime! It turns out the two are con artists extraordinaire, and have been using the fox hunt routine as an act. But our ever efficient Tom & Jerry, ready with rod and reel, manages to outfox the fox and the hound by reeling the box of victuals back into their home! 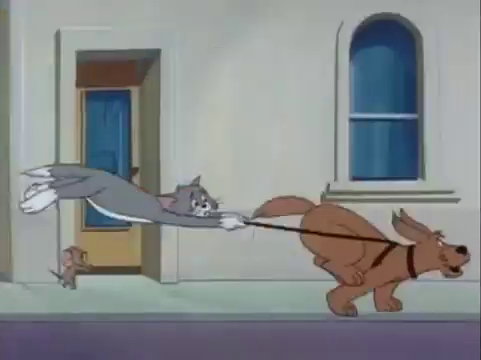 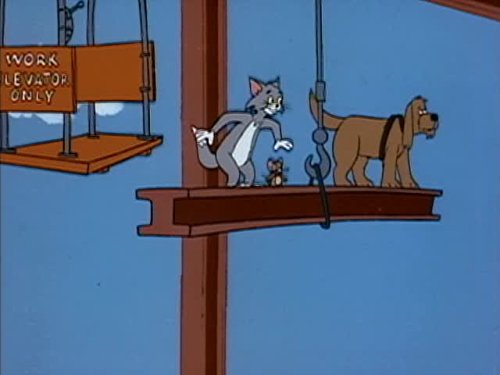 Tom and Jerry try professional dog walking, taking Boo-Boo, a wealthy lady's English sheep dog puppy for his afternoon outing. The huge, exuberant pup drags Tom and Jerry through one harrowing adventure after another, from chasing a cat to chasing a butterfly, finally swinging through the framework of a high-rise building under construction, his terrified "protectors" behind him. When the exhausted pair is wheel barrowed by Boo-Boo to his mistress, she tells them to walk him again right now! Boo-Boo runs off, chasing a small gnat, dragging Tom and Jerry behind him.

A duckling tries to catch up with his flock, but he is too little to keep up with them; his wings "just won't cut the mustard." Tom and Jerry offer to help him. They try different methods to send the duckling south, everything from constructing a paper airplane, to riding a pelican, to building a catapult. These, and other, methods fail, and the three realize they will have to try faster (and more practical!) ways to get the duckling south. They try to hitchhike. It turns out they are hitchhiking with a robber, Blackie, en route to Miami, Florida, where he has "a big job planned there!" The police stop the car and arrest Blackie. (And inserted here is a message to kids, courtesy of the cop, never to hitch a ride with anybody!) Next, they jump on a railroad handcar. Tom is forced to push it faster as a train comes speeding towards them. They screech to a stop at the train station in Florida, where Tom is still making the motions of pushing the handles of the handcar, even after getting off of it! The three of them relax at the pool and, the flock lands at the pool to meet Tom and Jerry.