Spike, a super-trained super-duper watchdog, is delivered by truck in a crate and hired to mind a department store for the night. Thinking janitors Tom & Jerry are prowlers, Spike begins a mad dash around the entire store to catch them, through escalators, in photography booths, into waterbeds, under hide-a-bed sofas, and in toy rooms. After a long stretch of chases, Spike is worn out, winding up in a baby carriage; when his bosses arrive to open up the store, Tom and Jerry help Spike by moving his arms and mimicking his voice to make his bosses think he is still on the job. They succeed and Spike thanks them for saving his job...but continues to chase them anyway! (Well, that's gratitude for ya...)

Tom and Jerry compete in a torturous, treacherous, terrifying cross-country motorcycle race; Travelin' Tom on his souped-up, 1200cc, double-overhead-cam "Road Ruiner," and Jumpin' Jerry riding his supercharged, 25cc, top-fueled "Mini-Monster." As usual, Tom is determined to win no matter what, and so he utilizes every underhanded trick in the book to best Jerry. He drops a haystack on Jerry's bike, and blocks the road with a billboard, but the sly cat is always undone by his own tricks. Convinced he is far ahead of Gerald, Thomas sets an alarm clock and drops into his hammock to take a nap. Jer arrives and decides to use this to his advantage; he pastes a sticker bearing his image onto Tom's rearview mirror before taking off. Tom wakes up and reenters the race, fooled by the sticker of Jerry on his mirror and unaware Jerry is miles ahead of him; when he uncovers Jerry's ruse, he crumples up the sticker and digs out for all he's worth! When Tom sustains a flat, he stretches his inner tube across Jerry's path, but is dragged, snapped back and entangled as a result. The pair finally make it to the finish line, where Tom builds a brick wall in a last-ditch effort to stop Jerry and his Mini-Monster once and for all, but Jer drives right over it! A desperate Tom leaps off the wall onto his Road Ruiner...and its front axle snaps under his weight! There is a photo finish, and Tom ties Jerry at the finish line on foot carrying the cycle in both hands! 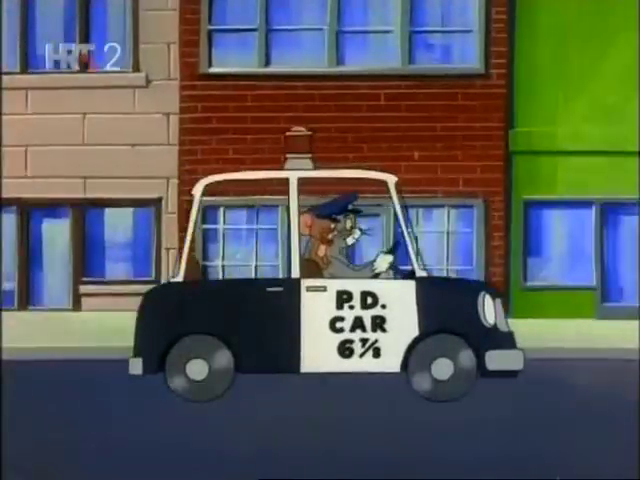 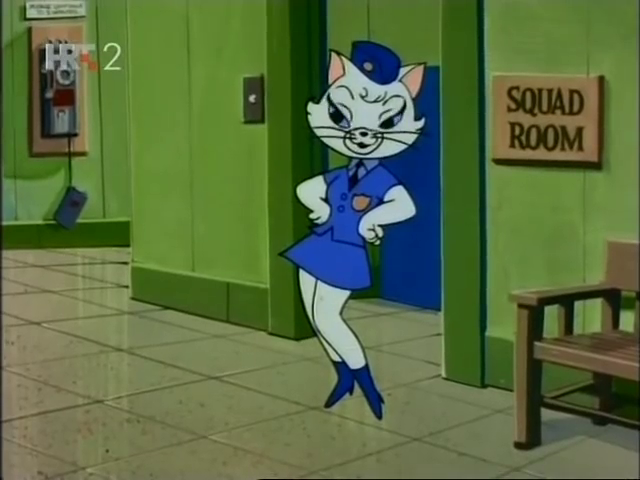 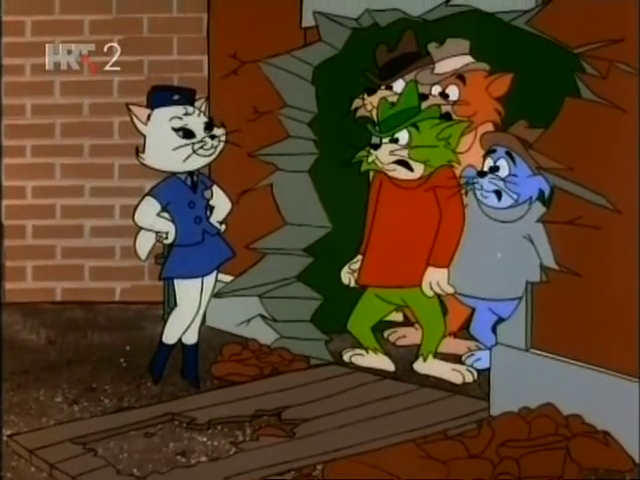 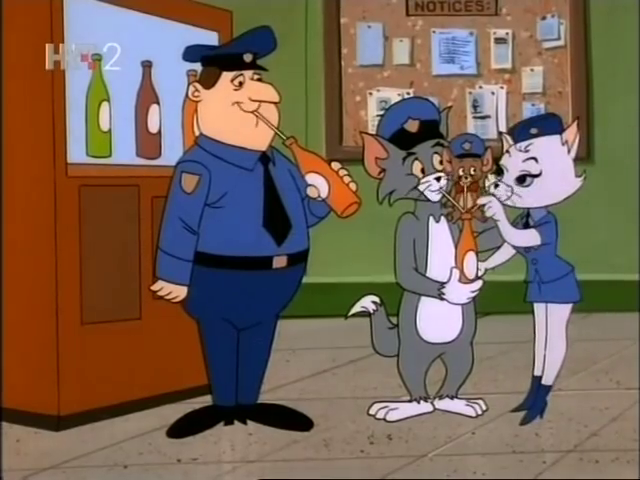 Police officers Tom and Jerry are assigned to train officer Katy O'Kitty by letting her ride in their squad car with them. The cat and mouse, convinced that a lady officer will get in their way, are resentful of her interference. To make matters worse, Katy manages to do their work better than they do, rescuing a kitten from a tree and saving Tom from a runaway skateboard. Finally, when she captures The Alley Cat Gang single-handedly, Tom and Jerry's police chief praises their work and Katy's report that they are "the greatest officers on the force". The chief decides to celebrate with soda pop, and when he develops problems with the machine, Katy comes to the rescue with that ever-handy tool: a hair pin. The chief, Tom, Jerry and Katy O'Kitty end by sipping orange soda pop.